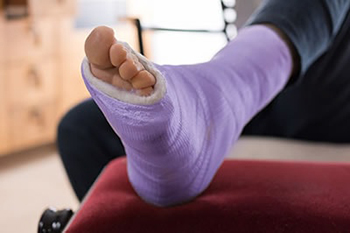 One out of ten broken bones are reported to be in the feet. When an object crushes, bends, or stretches the bone beyond acceptable ranges, the bone will break.

Pain, swelling, bruising, and redness are all typical symptoms of broken foot. Severe pain—to the point of not being able to walk—usually depends on the location of the break in the foot. Toes are on the lower end of the pain scale, but heels are high, as are a few other particular bones. As the severity of the broken foot increases, symptoms like blueness, numbness, misshaping of the foot, cuts, or deformities will become apparent. These symptoms indicate the need to see a medical professional with access to an x-ray facility.

Prior to seeing a specialist, precautions should be taken to reduce pain and swelling. Elevate and stabilize the foot, and refrain from moving it. Immobilization of the foot is the next priority, so creating a homemade splint is acceptable. Keep in mind that while creating a splint, any increase in pain or cutting off blood circulation means that the splint should be removed immediately. Use ice to decrease swelling and relieve pain symptoms.

The patient should note that the treatment for a break can vary. It will depend on the severity of the fracture and the cause of the break. Crutches, splints, or casts are common treatments while surgery has been known to be used in more severe cases to repair the break in the bones.

Broken ankles are a serious injury that can lead to an inability to walk, function, and also cause a significant amount of pain. A broken ankle is a break in one of the three bones in your body that connect at the ankle joint, the tibia, the fibula, and the talus. The tibia and fibula are your two primary leg bones that connect at the knee, which sit directly upon the talus bone. This is protected by a fibrous membrane that allows for movement in our ankle joint. A broken ankle is usually caused by the foot rolling under or twisting too far, causing one of these three bones to snap.

A broken ankle is different from an ankle sprain, which occurs when the ligaments are ripped or torn without the bones breaking. A sprain can still be very severe, causing bruising in the foot and an inability to hold your own weight, much like a broken ankle would. If you’re unable to stand, and suspect that you have a broken ankle, the first thing to do would be to see a podiatrist and get an x-ray to determine the severity of the break.

One immediate treatment for pain relief is elevating the feet above your head to reduce blood flow to the injured area. You can also apply ice packs to your ankles to help reduce swelling, redness, inflammation, and pain. After these initial steps, getting a cast and staying off your feet as much as possible will aid in the recovery of the broken ankle. The less movement and stress the ankle has to endure, the more complete it will heal. A doctor can determine if surgery is needed in order to heal correctly. In these cases, an operation may be the only option to ensure the ability to walk properly again, followed by physical therapy and rehabilitation.

It is highly important to determine if surgery is needed early on, because a broken ankle can become a major hindrance if it isn’t dealt with appropriately. If not professionally treated, the broken ankle will inhibit your walking, daily functioning, and produce a large amount of pain. Treating your broken ankle early on will help prevent further damage to it, so it is highly recommended to consult with a podiatrist as soon as possible.